"Blessed is the one who trusts in the Lord, whose confidence is in him."
​Jeremiah 17:7
There are many reasons why families find themselves homeless. Whether it is a job loss, a natural disaster, or an injury, families comprise 40% of the homeless population. Here are the stories of two families we have housed in our first year, recounted by our network director.
​Stories are told with permission.

​Raquel Bonner
Update from our first family.
We are all doing well. The boys are playing football again this year and Xeniyah made it for the cheer-leading team; she was so excited. I’m still working and doing well. I’m getting my cast off on the 28th, so I’ll be getting things back to normal. Quadir and Carmello are doing great; they love going to daycare and Quadir was accepted to their preschool program.  Life is close to perfect now.  There are a few things that have room for improvement and growth but other than that I couldn’t be happier.  I got a raise so I was finally able to get myself a reliable vehicle after the wreck we were in and I’m just staying positive and count my blessings each day. To this day, I still thank you for all you and Family Promise has done for myself and my family.  I’m truly thankful.
​Raquel Bonner 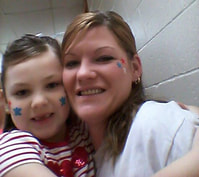 Cheri and Bianca
Update #2
​After reading your statistics the average length of stay is amazing! I guess it could be two fold, but it’s my hopes that clients and organizations are working together at a better rate and Indiana County is coming to the “rescue” with better resources for the families. I truly love Family Promise and wish I could do more and Lord knows I am trying! Just wanted to give you an update I have been approved for a 2013 Nissan Rough. So, since 2 weeks ago I have a reliable care with a warrantyJ. Bianca is doing great in school and her dad continues to be cooperative and sees her on schedule. I also filed my taxes this year and feel more accomplished than one person ever could. It has probable been 8 or more years that my refund was more than $800. I owe all these wonderful things to Family Promise, because that is where I learned that saving money isn’t supposed to be a pain and if budgeted correctly it’s actually the most important thing in someone’s life. Overcoming whatever life throws at you one dollar at a time.. haha. I have made it my personal goal to get my credit up and running so that I have the ability, if ever needed, to buy a house for my family. I have learned through your program that I don’t have to settle for someone who doesn’t truly care about ME. I started looking for a healthy relationship not a fixer-upper! I have stayed in contact consistently with at least two Family Promise Volunteers that I can confide in and look up to. Last but not least…. We have celebrated 4 years clean! Yes ma’am..without Family Promise and all of the wonderful volunteers my family would not be as strong as it is now. Thank you Ms. Carole, I love you and all of the volunteers and thank you for everything you have empowered me with.
Love Cheri and Bianca

Cheri and Bianca
Update #1
​​It has now been 5 months since a scared, lonely, fearful young woman walked through the Family Promise doors. That young woman was me, Cheri. I was unsure of all the rules, unsure of life, and unsure of what my future would hold, not to mention my faltering faith. That quickly changed once I was willing to allow the program to start working in my life. I realized in order to receive all of the benefits from Family Promise I would have to give 100% of me all of the time. Over these last few months, I have visited over 10 churches, 100 volunteers, and established connections that could never be replaced. I have made many lifelong friends, reconnected spiritually to our Father and learned that no matter my circumstances, I AM WORTHY! When I began this journey, I had no transportation, no housing, and no employment, a boat without a paddle. That is what Family Promise, now 5 months later, has been for me, my life raft. I now have acquired a 2004 Chevy Impala, full time employment with benefits, a two bedroom apartment, a relationship with God that will not shatter, and a found a home in a local church, extending my family. Many of you are aware that I have been recently dealing with custody issues regarding Bianca. Truth be told, in the beginning of the “battle” I thought all hope was lost. However, it has been through the support and encouragement of all the churches and volunteers that have helped me hang on to God’s promises that have allowed me to continue to persevere. Currently, I am able to see my daughter every other weekend and by God’s grace and mercy she will be home within this week. I would like to sincerely thank everyone that is involved with and believes in Family Promise. Without each one of you I would not be who I am today. I have learned how God can work for my good even through the pain. The key for me was to learn how to trust Him in the storm and patiently wait for the rainbow. I now look forward to continue my journey with each one of you and hope to encourage others who come into the program. Now walking into a new chapter proud, encouraged, blessed, happy, alive, and never alone! Galatians 6:9: “So don’t get tired of doing what is good. Don’t get discouraged and give up, for we will reap a harvest of blessing at the appropriate time.”
​
On Easter weekend, Bianca returned to Cheri’s custody. Bianca is now attending Homer City Elementary School and is a cheerleader. Cheri has joined Trinity UMC. She continues to work full time and is a now a volunteer for Family Promise.

Tina's Story
I received a call from Lifeway Pregnancy Center in a neighboring county that one of their pregnant clients was in a local park with her 7-month-old baby, Ally. She was alone, crying and had no place to go. She had been homeless for over 2 years and had used up all her shelter days in several facilities. With less than 2 hours’ notice, Trinity UMC, the host church that week set up a room for her and the baby and ‘threw another potato in the pot’.

Tina had been a ‘change of life baby’. Her parents were elderly by the time she had reached her teenage years. Because of their health problems, Tina was needed at home to care for them. After she graduated high school, she remained with her parents until they both died. She has five older siblings but because of the age difference and some feelings about her being ‘spoiled’ by the parents, she does not have a relationship with them. For all intents and purposes, Tina did not start her life until she was 30. She was desperate to be loved and accepted by someone, making her quite vulnerable to Michael, her children’s father. Michael already had five children to four different women prior to meeting Tina. Tina’s denial about Michael’s commitment to her was strong. Michael never visited Tina, missed Ally’s first steps and her first birthday and never provided any financial assistance. I frequently confronted Tina’s belief that Michael was going to provide for her and her daughters, which would provoke anger in Tina. Tina claimed she could not do anything while Ally was awake let alone seek housing. This led to more angry and frustrating conversations with Tina. The church volunteers embraced Tina and Ally and after much coaxing Tina began formulating a plan. Although Tina’s plan included Michael joining her once she got a home, we made every effort to set Tina up as independently as possible. After 3 months of living life together, Tina and I said a tearful goodbye as she moved into her own place. Three days later she gave birth to her second daughter, Rachel. Michael did not come to the hospital. Tina’s house is two blocks from one of our Host churches. Volunteers from that church helped Tina move and gather furniture. They watched Ally while she was in the hospital giving birth. They have continued to support her by taking her to doctor’s appointments, the grocery store and Laundromat. After Tina recovered from childbirth, she began to attend that church. The congregation accepted her and her daughters. They encouraged her and loved her. Recently, I attended Ally and Rachel’s baptism. That same Sunday, our families were again being hosted by that congregation. Tina stayed overnight with them the first night and she and her daughters provided the meal for the families on Friday night.